I am very happy that Harry Kane has been declared fit England to face the United States, but we have to look after him – and Gareth Southgate could turn to Marcus Rashford to lead the line if he doesn’t want to risk his captaincy.

Kane was able to train after picking up an ankle injury in our 6-2 win over Iran and a scan showed no serious damage, but it was a reminder that we need to think about who will replace him in Qatar if needed – and I’m happy with our choices.

The most obvious Plan B is to bring forward Newcastle striker Callum Wilson because he plays in the middle for his team and can play at least part of the provider role that Kane does so well.

I was so pleased with Wilson’s decision to pass to Jack Grealish for our final goal on Monday rather than shoot himself, and that’s the kind of collective thinking Southgate will love.

If he thinks we need a kind of backboard against the US or any other team – a player to feed so he can play other people – then Wilson is the best man for the job.

I still think Rashford will get the nod if Kane is rested on Friday. From what we know of Southgate’s coaching style, there is a row in his squad based on the players he trusts.

We’ve seen that with the selection of people like Raheem Sterling and Mason Mount, and Bukayo Saka also falls into that category now – if he’s fit, he starts. The same goes for players outside of his starting lineup.

With what Rashford has done for England in the past, and the goals he has scored, he is probably ahead of Wilson, who has just returned to the team after a three-year absence.

We know Rashford is most effective out wide and prefers to play on the left of Manchester United’s attack, but his pace is still a threat in the middle.

I have confidence in him and Wilson, so I honestly don’t think it matters much who is at center forward against the USA – we should win anyway – but we will definitely need Kane when we face tougher opposition.

He has been criticized for dropping deep for England in the past, but we saw against Iran how well he fits into our system, with runners going past him and down both sides. Neither Wilson nor Rashford can do exactly what he does.

Some of Kane’s crosses against Iran were so good, he reminded me of David Beckham, who delivered the best deliveries into the box of anyone I saw during my playing days.

The one he put up for Sterling was on par with Becks at his best, so he’s fine for the rest of the tournament.

Should England change anything else? 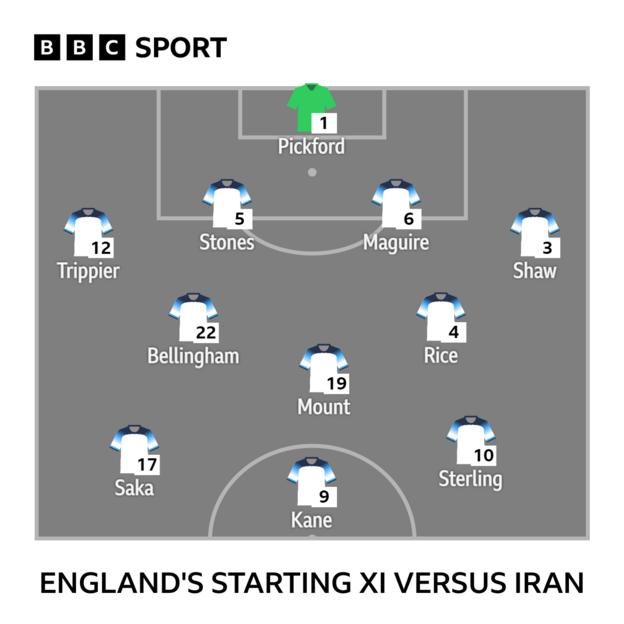 There is an argument that, if Kane is fit, we should stick with the same team that scored six goals against Iran – clearly nobody deserves to be dropped after that – but I have a feeling Southgate might want to give to Kyle Walker a few minutes. .

Walker hasn’t played since injuring his groin in the Manchester derby on October 2 and we’re told he’s not fit for the Group B opener.

Southgate will switch to a back three at some point in this tournament, and when he does, Walker will feature on the right side of that trio. That’s why he’s here, but he needs time on the pitch to get his sharpness back.

We may not see that change in system against USA, but whatever the lineup, I wouldn’t be surprised to see Walker come in to start at right back. If it’s anywhere near, it’s bound to show up at some point.

I like the fact that we have already got so many players involved and that people made an impact on the bench against Iran.

For two of the substitutes, Rashford and Grealish, to score was really perfect and of course Wilson put one of those in as well.

Of the 26-man squad, 16 have already taken the field and all will feel they have contributed.

The unique conditions of this winter’s World Cup mean the players have been in prime form since midway through their domestic season, and it seems Southgate is doing his best to keep them on the bubble by involving as many of them as possible. It’s just right.

So far I’ve talked about everything from the England side – who we could bring in if Kane leaves and anything that might suit our squad needs in the tournament overall.

I certainly don’t think Southgate will make any changes to his selection or formation specifically to face the opposition. His decisions are on our terms, because I don’t think we should worry about how the US will hurt us.

Again, this game will be about breaking the opposition down and will provide a different test to Iran, who sat on the edge of their box and allowed us to dictate play in their own half.

Instead, pressing high is pretty much the USA’s mantra, and it should be a useful game for us to develop how we beat their pressure and work the ball forward, moving to every part of the pitch.

We will have to find the balance between Declan Rice and Jude Bellingham dropping deep to take the ball away from their defenders and make sure we get Bellingham up front as well.

The fluidity of our movement and the way we moved so quickly and accurately was one of the best things about Monday’s performance.

Martin Keown was speaking to Chris Bevan in Doha.

Get the latest results and goal alerts for any team in the FIFA World Cup by downloading the BBC Sport app: apple – Android – Amazon

The NBA Challengers are always in the hot seat

“You make your own luck and we played like crap”